My prayer for a while has been that we bring Avery home this year. We have been officially waiting since December 11, 2006, but started this process the January of 2006. It's been 3 years, and at the current wait times for a non-special needs baby it will be 2012 until we get to have Avery, if that. Even if the CC@A starts to speed up and do about 10 days a month it will be 2011. When we started this process they were referring about a month of LIDs at a time, now they are doing anywhere from 1 to 6 DAYS worth. Ugh. Those are the basic facts of adoption for Ch!na right now. Do we want to wait that long? Do we want Carlie and Avery to be that far apart?
This wait time has been on our minds a lot, but we weren't sure what we could do about it, if anything. We were just waiting, and, quite frankly, got a little lost in the wait, content. It was frustrating because we know there are MANY orphanages in Ch!na with MANY children in them. What was the big hold up and where was the big speed-up we were all hoping for after the Olympics? As each month of referrals went by with things not progressing like we had hoped, we were getting more and more frustrated. So, we wait . . .
Then I came across this blog post from a fellow Dillon mom, who now has 3 adopted children from Ch!na (go check it out at Gathering Peeps). The post is based on Ephesians 6:12 "For our struggle is not against flesh and blood, but against the rulers, against the authorities, against the powers of this dark world and against the spiritual forces of evil in the heavenly realms." The blog entry goes on to say that satan hates families. He hates these orphans and God's heart for them. That we fight a very real enemy! This is so true! And Ch!na being a country who does not want to have too much to do with Christ, well, then maybe we need to be a little more proactive in doing what we can to bring Avery home!

We have known that there are many children on the special needs waiting list. Some children with very minor, correctable special needs, and some with more severe needs who are all waiting for their families. There are several families that I follow along with on their blogs who have adopted a child from the waiting child list. These children are beautiful and such joys to their families! However, if we wanted to be considered for a special needs child we would have to switch adoption agencies because ours did not have access to the SN database - yet. Our agency is wonderful, and convenient! I know it's about getting your child home, not about the agency, but we just weren't too sure about switching. My husband and I decided to go ahead and fill out the SN checklist, and be ready for whatever. It was a little over two pages long, with almost any special challenge you could think of. Our job was to go through each one and decide if we could/would accept a child with that particular need or even multiple needs. What could our family handle? We poured over that list. Researching anything I wasn't familiar with. It took us a long time, we were very thorough. When we were just about done with the checklist we received an email saying that Dillon now had access to the SN database! HALLELUJAH! We didn't have to switch! Breathe a sigh of relief! Praise God! Yee HAW!

I am just amazed and in awe of how He opens doors and closes doors at the right times. Paths are clearer, straighter and shorter!

So, I turned in our special needs checklist this past Friday. The wait has shortened for us considerably.
More information to come . . . .

This HAS to be the Last Snow 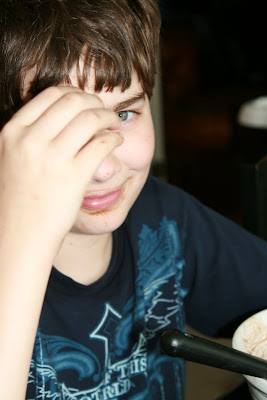 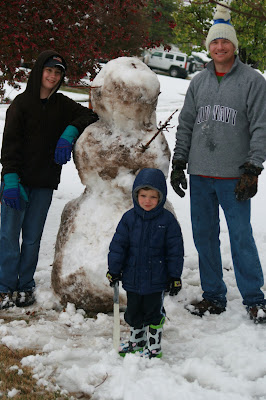 Here it is the tail end of March, the season of Spring was declared about a week ago, and it's snowing. Not just a light dusting, but at least 4" of big huge beautiful snow flakes. I think the temperature got down to 33 degrees, so the snow was a bit wet - perfect for snowmen and snowball fights AND baking brownies. Conner just happened to be in the kitchen when I was making the brownies so he got to lick the bowl. Does he not realize he is getting food all around his face when he's eating? He's so cute. 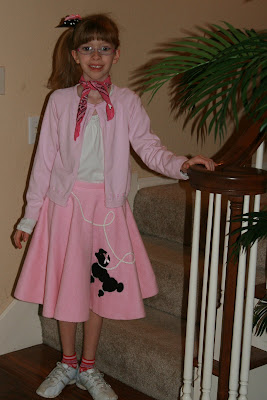 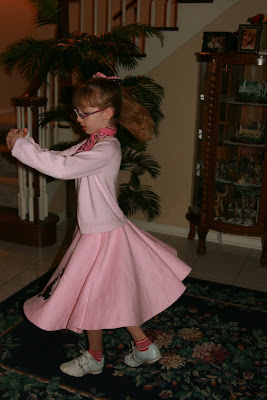 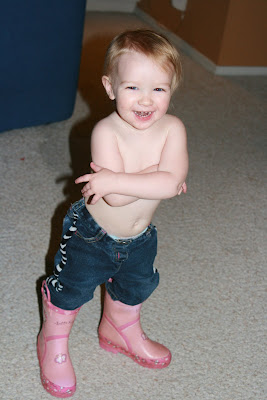 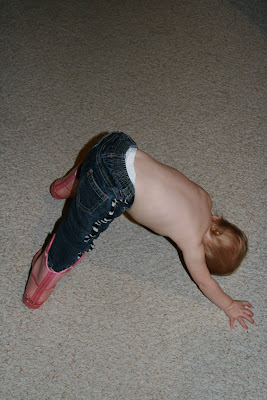 Well, it seems that nothing has been going on around here and then BAM! We have lots to report! This week was Spirit Week at Nicole's school and Friday was 50's day! She was sooooo excited! We were blessed to borrow this poodle skirt from the Y family in our church and it worked perfectly. Carlie really enjoyed playing around in some rain boots and I thought these pictures were cute!
More coming . . . .

I was spending some time lurking on some blogs of families who are in China having their Forever Family Days.  It gives me so much hope and longing when I look at these blogs, and I can just imagine when it's our turn!  Well, I came across this one families' blog.  The most current post (they had already received their daughter, who seemed to be about 11 mos. old) talked about how she had gone to have a Chinese foot and back massage for only 10 dollars!  But when she got back her frazzled husband had been dealing with their precious daughter (who they had waited on for almost 3 years, mind you) who had been CRYING THE WHOLE TIME SHE WAS GONE BECAUSE SHE MISSED HER MOM!   The mom who posted this stated that she didn't realize that her daughter had started to attach to her yet!  ARE YOU KIDDING ME?!  How can you leave your brand new adopted daughter to go get a massage (well, it was only $10!)?  Did she not read ANY attachment books?
These adopted children, not only have they gone through so much in their short lives here on earth, but the last few days before they meet their Forever Families is probably the toughest!  If the child has been with a foster family almost since they were abandoned then a day or two before they are placed with their Forever Family the foster family takes them back to the orphanage to spend the night.  The next day they are taken into a room to meet their adopted families - a room they've never seen before, filled with people who look not too much like them, and who do not sound like anything they've heard.  Can you imagine what is going through that child's head?  And then all the people who do look somewhat familiar leave them there with these strangers.  The adopted children go through a grieving process and it is a traumatic experience to be a part of.
But by all means, let's go get a massage!  It's only $10!  I'll be gone for an hour and a half, I promise, she won't even know I'm gone.  You'll be fine, brand new daddy!
By the way, I did not leave a comment on this person's blog.  I refrained.
Posted by Lori at 12:35 PM 3 comments: 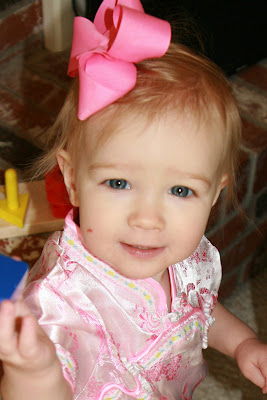 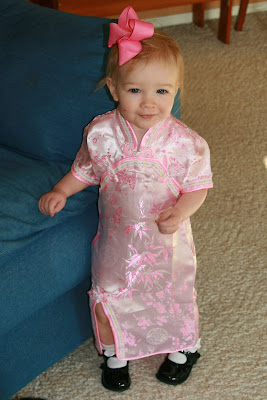 Carlie wore her Asian dress to church today and she looked SO cute! She is growing up so much and talking more and more every day. Her little personality is so sweet with just a tad of spicey. She is now 17 months old and is just no trouble at all, no trouble at all. She just fits right in, but makes her point known, too. If someone is bugging her she lets out a squeal and someone comes running. No one likes to hear her fuss for long! Spoil her? No, well, maybe just a little.

The CCAA matched 1 day last month, yes, ONE! That is the smallest batch ever. Ugh. That was very discouraging. This month it looks like they will match 5 days, although it is not official yet. The WONDERFUL news is that Dillon has families with an LID of 3-7-06 - so they are NEXT for sure! They are so excited to KNOW they are NEXT! It is going to be so much fun to follow along on their journeys!

Just a Couple MINOR Deals the Past Couple Weeks

It's been an interesting couple of weeks around here. We've had two incidents, one turned out to be very minor (but could've been permanent - sort of), and the other was sort of major (and WILL be permanent). I'll start with the almost permanent one . . .

One of my daughter's left a GREEN Shar*ie marker, the other one found it. The finder of the PERMANENT marker used it to mark up her eye, unusually, it didn't go into her mouth! After scolding the leaver of the marker, the finder went into the bathtub. Would you believe that it came pretty much right off?! I just knew we were going to take a green eyed baby to church the next day - minor catastrophe avoided. 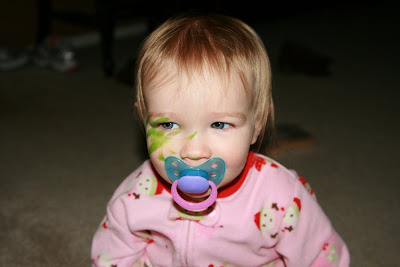 The next incident started off with a phone call. "Is this Conner's mom?" "Yes." "This is so and so nurse at the 6th and 7th grade center. Conner has had an incident with some scissors and cut his finger pretty bad." "Is he OK? Does he need stitches? Do I need to come get him?" "Well, he's kind of "shocky" and it's bleeding pretty bad. We can't get the bleeding to stop." "Alright, I will be there in about 10 minutes." After locating Lyndal (he was at the bank) and having him meet me in the parking lot to watch the two little ones
I went into the school. Conner was very pale and clammy and had his finger all wrapped up. I asked the nurse if we needed to have it looked at. "There's nothing to stitch up, but he got a "bleeder" and it just won't stop bleeding. I would have it looked at if I were you." I got Conner in the van and asked him what he thought. He was just a little beside himself. He doesn't handle blood well at all. But I hadn't seen the injury and didn't know if he just had a little cut or what. We tried to unwrap it and didn't get very far and decided to go ahead and go. To make a long story short, they gave him a shot in the wound to numb it, put silver nitrate on it to stop the bleeding, bandaged him up and sent us on our way. The nurse that bandaged him up said to "just put a band-aid on it"! Can you believe that?! It started getting infected, so we had to go to our pediatrician, get some antibiotics, doctor's orders to take it easy in PE, and they bandaged it up like a light-bulb. They were very surprised that the other nurse told us to just put a band-aid on it. He's going to have a pretty good chunk out of the side of his finger, and somewhere in Science class there's a bit of a finger. If you find it please let us know. We used to be attached to it. 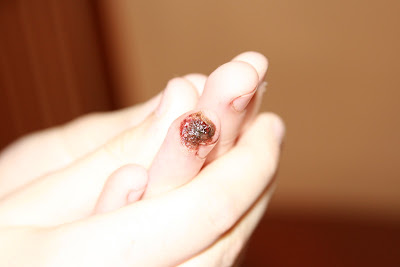