Here we go, recipe numero 2 and tres. They kind of compliment each other and I needed to make the first to make the second. 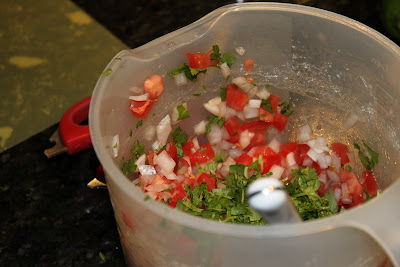 I made Pico De Gallo and it was pretty good. A tad 'oniony' for my taste, but was wuuuunderfullll with the other stuff I made that needed the first stuff. But I must admit, I REALLY dislike chopping things. I'm just not good at it and I try to improve, really I do! So I did a little research on how to chop cilantro: 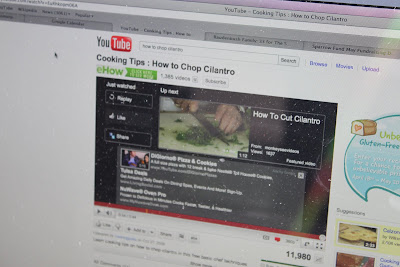 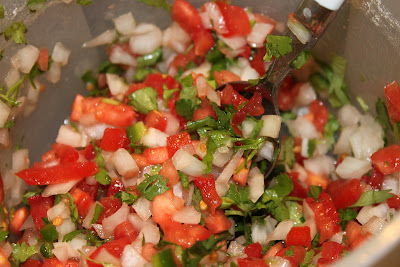 So, the Pico had to dive into a little treat that I REALLY like - guacamole! THAT was delicious! I will definitely be making that again, and again, and again. I'll suffer through the chopping, cause it's so worth it! 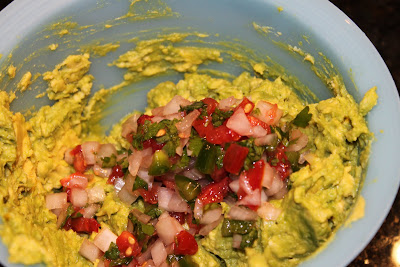 The second time I made the guacamole I cut my finger pretty bad trying to pit the avocado :(. Thankfully I was standing right next to the sink and rinsed it off in the water before it started to bleed. I did not get a single drop of blood in the guacamole! Six stitches later and I was back in business!
What's next?
Posted by Lori at 10:42 PM 1 comment: 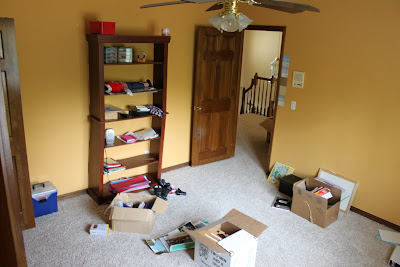 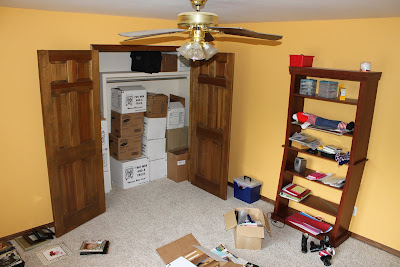 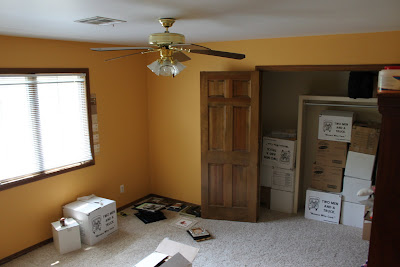 Ugly mustard paint - gone. Boxes - gone through and organized. Leaning wood shelf left by previous owner - collapsed when I tried to move it and got hauled to the curb. Ugly fan - still there, but not for long :).
We have painted it a nice neutral color. I know what direction I want to go as far as decorating. just have to buy some furniture, window treatments, and accessories and we are done! This room will be peaceful, restful, minimal, and relaxing. Hopefully.
The previous owners had this room for just some odds and ends like college memorabilia and mismatched furniture. I think they also did some smoking in here because it didn't smell too nice. But we are on our way to getting at least one room done!!
Posted by Lori at 10:38 PM No comments:

So, I purchased a certain person's cookbook. She's a displaced city girl now smack dab in the middle of rural Oklahoma. She married a rancher, started a blog about photography, cooking, and raising kids, and she calls herself The Pioneer Woman. Her blog is one of the most popular read blogs around and I am just in awe of how she gets it all done everyday with a smile on her face! I got something to learn from this woman! Numero uno would be how to cook better :)!
I remember a movie a few years back about a girl who decided to cook through Julia Child's famous cookbook (can't remember the name of the cookbook, that should tell you something), and she blogged about it, then it was made into a movie - Julie and Julia. Pretty good movie. I have no desire to learn how to cook like Julia Child, at least not yet. But I do have a desire to learn how to make good food like Ree (The Pioneer Woman)! Here goes with the first recipe in the book . . .
BBQ Jalapeno Poppers! 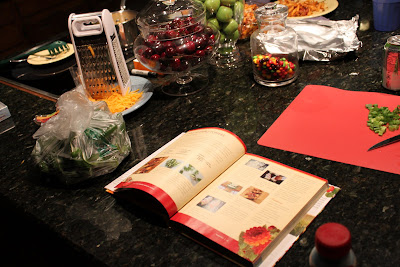 I followed the recipe exactly as the book said, even had to go to two different grocery stores. Not because her ingredients list was difficult, but because the first store had NO jalapenos. And since the title of the recipe has the word jalapenos in it, I figured that was something I could not leave out. I also have a bad habit of substituitng my own ingredients (like I know what I'm doing) when I either don't have what is called for or when I don't know what something is. And I wonder why I'm famous for NOT being able to cook! 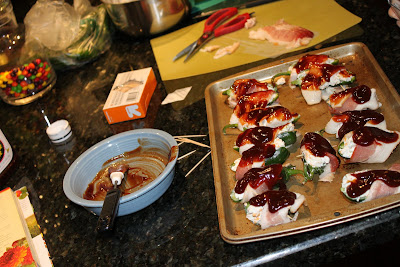 So far so good. Dealing with the bacon was a little slimy and gross, but if I ignored the fact that I was dealing with raw meat and let myself go to my 'happy place' I was fine. Why does raw meat gross me out so much? Maybe it's the word 'raw.' Don't like it. I'm also not a huge spicy hot girl, so I was a little worried about all this jalapeno talk.
But I must say that these were absolutely delicious!!! I could have eaten the whole pan! But, I refrained. I did learn a couple things that I will apply the next time: try turkey bacon, and my oven's thermostat must be 'off' because it took way longer than what the book said it would to cook them. Other than that, these will definitely be tried again, like tomorrow! 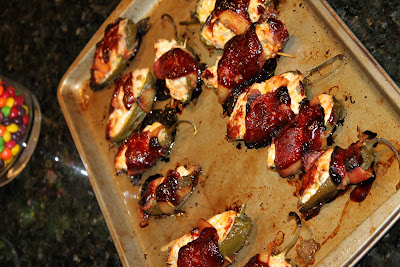