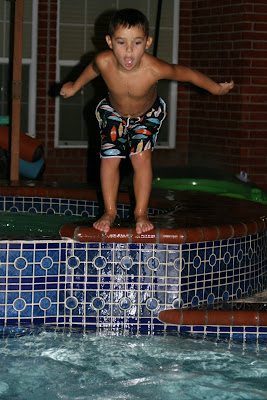 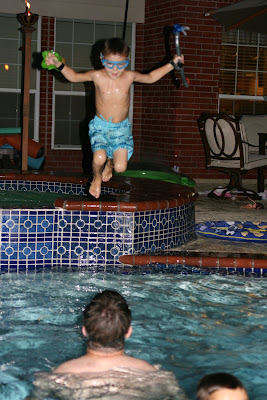 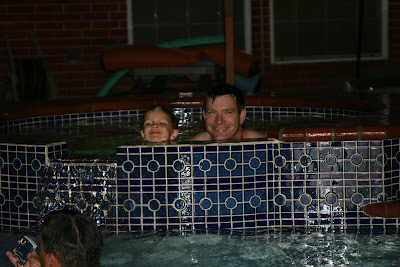 We didn't tell E we were going ANYWHERE because we knew he would obsess about going to Carson's house and not stop talking about it AND because we wanted to see the LOOK on his face when we actually GOT to Carson's house. But, obviously, as it got closer to time to go, he figured out that we were going somewhere. So, we told him we were going to GaGa's house. He was so excited! He packed a HUGE backpack of toys to take (including the white mouse puppet that 'hopped in his bag' the last time we were at her house), a few clothes, and we were off.

As we were loading the van Lyndal peeked his head in to ask Conner a question about a game controller that we might need at Aunt GiGi's house. When Lynbal went back into the house, Ethan said, "GaGa doesn't have a sister named Aunt GiGi?" I had to tell him that what he MEANT was Aunt Chrissy. So, we're all loaded into the van driving over to the vet to have Jasmine boarded (we usually take her to GaGa's with us). E was upset and asked why we couldn't take Jazzy with us to GaGa's? I just told him that we couldn't this time. Not another hint of confusion was spoken from his far corner of the backseat of the van for many hours. He pleasantly rode, reading books, and watching movies. He's only 4 so the MUCH looooooonger drive - 9 hours compared to about 4 - didn't seem to tip him off either. *SMILE*

When we were about an hour away he started whining because he was thirsty. So, I texted Angie to tell her to be waiting in her front yard with Carson holding a drink for Ethan. For the next hour he cried and whined because he was sooooo THIRSTY! Like he was going to DIE if he didn't get a drink RIGHT THEN!!! But when you are that close to your destination YOU JUST WANT TO KEEP GOING (not to mention the fact that we had some pop in the van, but he didn't want that, he wanted 'Bug Juice.' This "drink" that Lynbal buys the kids whenever we are on trips and have to stop at gas stations, it's quite lovely AND healthy I'm sure. We FINALLY pull up to their house and you can tell E is confused. He gets out, Carson hands him the drink, Ethan says, "Thanks Carson." I said, "OK, let's get back in the van we've got to get to GaGa's house!" Ethan says, "Bye, Carson." And gets back in the van!

How fun and exciting!!!

Have a great week!
Blessings,
Robin