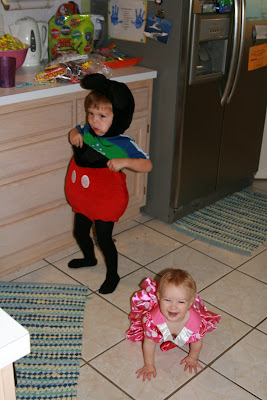 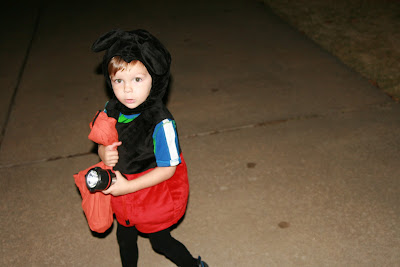 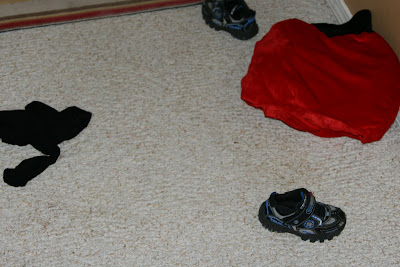 Ethan wanted to be a shark first - couldn't find one. So, I took him to the Disney store and told him that he could have whatever costume he wanted (safe costumes there, not too gorey, or evil, and they were %50 off!) we came out with a Mickey Mouse costume for Ethan, and a Minnie Mouse costume for Carlie. Won't that be so cute mom thinks!? I just had to get a long sleeved black shirt and some black tights (I'm thinking as I'm buying the tights that he will definitely not be happy about the tights, but I want the costume to be PERFECT) to go under the Mickey costume and we were set.
So, Halloween night rolls around and we are getting dressed. He had on a blue and green soccer type shorts outfit that he wore to preschool and he was stressing that he couldn't put the Mickey costume on OVER the soccer shorts ensemble - we hadn't even attempted the tights and long sleeved black shirt yet. Somehow I talked him into the long-sleeved shirt, tights, and Mickey costume. He had it on for about 10 minutes and just couldn't stand it, and I tried everything to distract him, but it was not happening. He finally stripped and put the blue and green outfit back on stating, "I am NOT going trick-or-treating! I am NOT going to get candy!" Jeesh. In the meantime the other kids are all getting their costumes on, I'm doing Carlie's bow for her mouse ears, and then Nicci's hair, Conner's in the bathroom putting on his face paint (don't call it make-up because he's not a girl) and Ethan is watching. He gets the tights back on (the LAST thing I EVER expected him to wear!), then the Mickey Mouse costume went on over the black tights and the blue and green soccer shirt. He put on the ears and the black shoes and he was set. Hey, I can live with this! He went willingly and it was his idea!
He'll outgrow this phase. I'm not worried. We do our best to handle it with as much patience, guidance, and humor as we can, all the while making him think that he's in control.
When we got home he IMMEDIATELY stripped and put on the blue and green soccer clothes.