When Does School Start?! 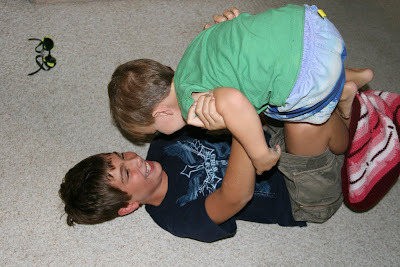 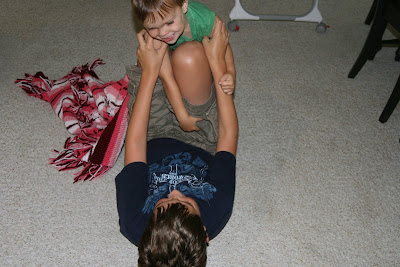 I LOVE having my kids home and being able to be a little liesurely in the morning, go and do fun stuff, get to bed a little later, and just be bums. Our summer has been so good! The kids have played well together and just had their usual little spats. But this past week has been AAAAUUUUGGGGHHHH!!!! Especially the two boys! They have been wrestling, chasing, tearing up, and being so ornery! This is usually how it goes: C says, "Hey E want to wrestle?" E says, "Sure!" They wrestle for a maximum of 2 minutes before I hear from E, "WWWAAAAAAUUUHHHHH!!! He hit me!" I say, "Where did he hit you?" E says, "Right dere." I say, "CONNER! Play gentle with him, he's only 3!" C says, "But Mom I barely touched him!" Then after a few rounds of this same scenario I got smart and watched them a little closer. E was doing it because he knew it would get C in trouble! The little stinker! I wasn't giving him enough credit. So, all that to say that I never wanted to be one of those moms who wished their kids went back to school, but this past week I can't wait till they go back to school!