I thought I might fill you in on how we got started on this adoption adventure. It seems that it has been so long since I have talked about our "story" that I thought I might get back to the whole reason I started this blog. . . .

In the 80's I had seen a news program or documentary on the population control measure known as the "One Child Policy" in China. The program had emphasized that since the enforcement of the policy that a lot of baby girls were being abandoned. It was very sad and confusing for me to hear that girls were not as valued in the Chinese culture as boys were. I was the oldest of three girls, and even though my sisters and I didn't always get along, I couldn't imagine life without one of them. Boys carry on the family name and help to take care of their parents in their old age in China. And with the financial struggles that existed in the country at that time it was very important for a family to have a son. If their first born child was a girl they might abandon that baby girl somewhere and try again for a boy. That just baffled me and my heart was spoken to. I was about 13 when that seed was planted.
I can remember when Lyndal and I were dating I would say that I wanted a little Asian baby. We would laugh a little about it, but I would continue to bring that up every once in a while. We went on to have two children born to us. When our youngest was about 4 we decided to have more children. We decided to have another biological child and then start the application process for our fourth baby - a girl. Ethan was about 6 months old when we began the paperchase for our fourth child.
While we were in the process of dotting every 'i' and crossing every 't' we were matched with a "buddy family." A "buddy family" is a family who has been there and done that and can be there for emotional support and answer questions. We had requested a family that had a son about the same age as Conner. Conner was a little skeptical about the whole thing and not too sure about adding another sibling, besides, "Chinese people eat dogs" he said. He also had told us that he didn't like to stand out and he knew that if we had a daughter who might not look too much like us that our family might be "looked at." So, we were matched with a WONDERFUL family who had 3 children born to them, and one adopted daughter (they now have three adopted children and are in the process of adopting thier fourth - YAY)! Their second son is a year older than Conner. We planned to meet at the zoo with several other adoptive families one day so we could all get to know each other. Our family was like a sponge. We were just soaking up every ounce of "adoptiveness" we could get that day. One of the families we met has two adoptive daughters and are waiting, now, on their third. This family has really touched my heart and I have never felt that God has put two families together as he did our two that day. They were just such special people and their daughters were such a joy to be around. That day was also huge for Conner. He really observed how our "buddy family" treated each other and handled the glances from bystanders at being a conspicuous family. As we were parting ways, Conner said, "I think I am going to be OK with this whole adoption thing. I think it's going to be cool." 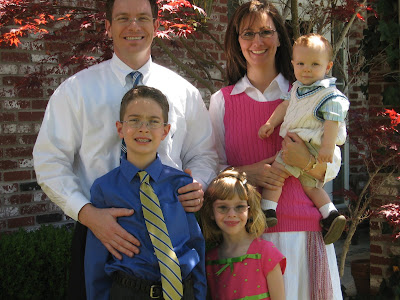 This was us when we first started our adoption process . . .