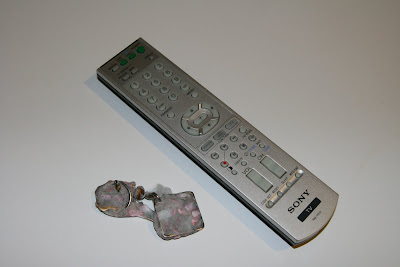 Today, I was searching for a key, our extra house key. I couldn't find it anywhere, but I had a sneaking suspicion of who might know where it was. So, I frisked him, the three-and-a-half year old. He didn't have the one I was looking for, but I did find this blobby looking thing in his pocket on the left. It is a different house key that I had been looking for. It's all wadded up in gum. He had stuck a pack of gum in his pocket one day and I didn't check his pockets (he's not much of a pocket guy, that's his older brother). So, I guess the gum joined with the house key to form one giant mass. Does anyone know how to get gum off a house key?

The remote has been missing for at least a couple of years, at least since the now three-and-a-half year old could walk. Thankfully, we didn't need it to do most of the stuff we needed to do on our TV, only to adjust the picture size (we watched stuff on "stretch" for a while until Lyndal figured out how to do it without a remote. That was fun, Op*ah on "stretch"). We searched everywhere for it, we tore our big TV room a part looking for this thing just sure it would eventually show up. Maybe he'd thrown it in the trash can? It was outside somewhere? We waited several months before we finally broke down and bought a new one. Today I was going through the tall bin that I store wrapping paper in and there it was, the long lost remote. I'm sure it felt like one of Andy's toys from Toy Story being gone so long (Remember Squeaker? The plastic penguin whose squeaker was broken?). We will reunite it with it's brothers and sisters very soon.

So, do I need to keep this kid on a tether attached to my belt loop? Or tie a string from my toe to his toe?